The Falls of the Ohio Foundation is grieving the loss of the Clark Cabin. The George Rogers Clark home site is a significant part of our national history. It’s at this site that the Lewis and Clark expedition began on October 26, 1803 after Meriwether Lewis met William Clark to form the Corps of Discovery. 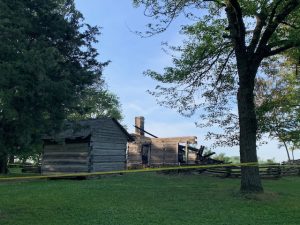 In 2001, “Clark’s Cabin” was erected on the site to help us reflect on the stories of this time. The cabin, originally built in 1830, was about the same size of Clark’s original home with a simple porch overlooking the lower portion of the Falls of the Ohio. And, while last night’s fire razed the physical structure of what was Clark’s Cabin, it can’t erase our history. As stewards of the natural, cultural and historic resources of this area, the Falls of the Ohio Foundation will do anything we can to support the Indiana Department of Natural Resources and our community in preserving this important piece of our past.

Board of Directors, Falls of the Ohio Foundation